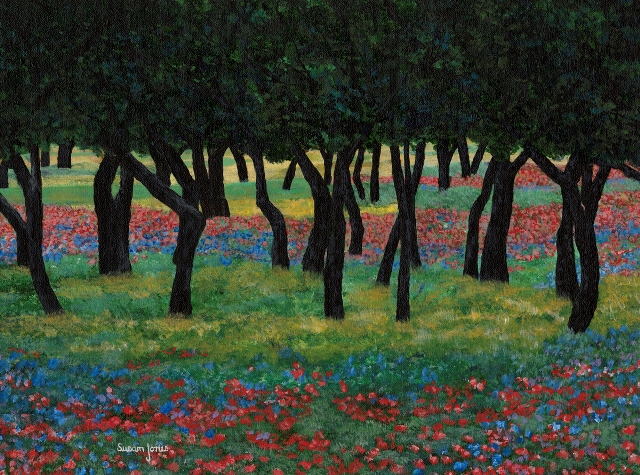 Christmas 1993: Susan Jones, artist, awoke with a slight stiffness in her little finger. Within a week, both of her hands were so swollen and painful that she was unable to even lift a paintbrush. Certain that this was some bizarre allergic reaction, she went to her doctor where she learned that she had Rheumatoid Arthritis, a crippling disease that not only affects the joints, but the entire body, including the internal organs as well as the immune system. Her gift of painting had been taken from her and this was the greatest loss.

At the arthritis center, Susan saw the once strong, straight bodies of other victims bent by this disease. Surprisingly, she also saw humor, beauty, and courage in them as well. They were bent, but not broken. After six months of treatment, she began to regain the use of her hands. It was during this period of pain and fear that she envisioned “The Gathering”.

When you see the print “The Gathering”, you feel a flood of emotions as you join this gathering of trees to rejoice in the beauty of the day. Susan continues the battle with her rheumatoid arthritis to keep it in remission, but not a day goes by that she doesn’t paint, nor does she take this gift for granted. Susan wishes that others might benefit from this message of hope.

View “The Gathering” in our online store

3 Responses to “A closer look: “The Gathering””